Most of us have given up on childhood aspirations to become the next legendary quarterback or star point guard for our favorite team. You may, however, have children of your own still in pursuit of such dreams. Or maybe you are an avid runner, biker, or other sportsman looking to improve your skills. A study completed last year by Stanford’s Sleep Disorders Clinic and Research Laboratory shows that sleep can give added advantage to an athlete’s performance.

The study focused on elite basketball players who were able to improve their on-court performance by extending their usual sleep time. The study completed by Cheri Mah and her colleagues suggest that “athletes may be able to optimize training and competition outcomes by identifying strategies to maximize the benefits of sleep.”

We all know the negative effects that come with a lack of a good night sleep. The dragging feeling, inability to focus, and lack of healing rest can hinder anyone’s ability to function at full capacity. This is especially true in the case of an athlete who has added stress of competition and physical exertion to cope with. It’s easy to see that sleep is definitely important to an athlete’s capability on the field, court, etc. This study, however, takes it a step further to say that an optimized sleep regimen combined with typical physical training and diet can actually make you play better.

“Intuitively many players and coaches know that rest and sleep are important, but it is often the first to be sacrificed,” Mah states in her article in the July 2011 issue of SLEEP. “Healthy and adequate sleep hasn’t had the same focus as other areas of training for peak performance.”

By the end of the sleep extension phase of the study, players ran faster 282-foot sprints (16.2 seconds versus 15.5 seconds). Shooting accuracy during practice improved: Free throw and 3-point accuracy increased by 9 percent. Fatigue levels decreased following sleep extension, and athletes reported improved practices and games. Mah stated that one of the surprising facts found in the study was that most players kept a sleep debt from persistent sleep-loss. Questionnaires given to the athletes pointed to the athlete’s high-levels of daytime sleepiness resulting from such sleep debt. In the end, players admitted that a focus on sleep as a part of training was helpful to their performance on the court. 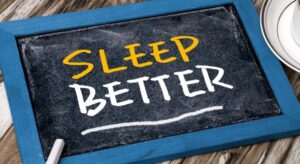 Mah suggests that optimized sleep is an “unrecognized, but likely critical factor in reaching peak performance.” The findings may also be applicable to recreational athletes and those at the high school, college, or higher levels. Of course, this study points to the benefits of long term sleep optimization. Sleeping late on Game Day, alone, will likely have no positive effects on performance.

So maybe you are thinking twice about letting your teenage athlete sleep in on occasion. We suggest going to bed early to get a head start on the next day. However you choose to improve your sleep, make up for your sleep debt, and improve your or your child’s athletic performance, make sure you start with a great mattress. Ten hours of sleep on an old, lumpy mattress isn’t going to improve your game anymore than ten hours of hard-core training. At Mattress Overstocked we know that great sleep starts with a great mattress. Browse through our collection on the website or come into the store find the best mattress to improve your game on the field, at work, and at life in general.

Different Types For High Quality Flooring That You Need To Choose

HELPING YOU TO EDUCATE YOUR CUSTOMERS